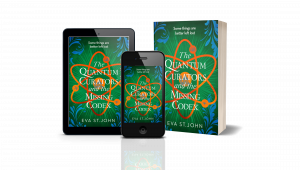 First Engineer glanced up from his desk in surprise. It wasn’t time for the midday briefing, yet Second Engineer stood in front of him tapping a print-out against her thigh. An alarming item in itself. Files were only printed when the digital copy had been deemed so harmful that it had been completely wiped and a single hard copy made, to be filed or burnt at a later date.

There was no need for pleasantries. They were engineers, their job was to ensure a smooth running of society. Let the other departments clamour to be the best. Engineers were silent and knew the truth of things.

‘This tripped our protocols as it ran through the security filters. It’s a lecture for the neophytes.’

All staff who worked for the Mouseion of Alexandria started at the same place. Whether they would go on to be curators, custodians or even engineers, they all started as neophytes. Then their skills were assessed, and they were allocated to the correct departments.

‘A neophyte lecture. What on earth could be in that to have triggered an alert?’

‘It was written by Curator Strathclyde.’

First Engineer frowned and held out his hand for the offending transcript. When Strathclyde had first arrived through the quantum stepper, First had argued vehemently that the man could prove to be highly dangerous. He had been overwhelmingly outvoted. The other departments had been charmed by Strathclyde and could see no threat in his friendly ways. They were treating him like a project or an interesting pet.

Despite First’s objections, Strathclyde graduated as a curator. Now, he was being considered as an occasional lecturer in Beta Studies. First wondered when the rest of the mouseion heads would realise what a threat to the stability of their society Strathclyde was. Who knew what dangerous ideas he might try and inculcate? His eyes flicked across the paper.

Who amongst us hasn’t wondered if we are not alone in the universe? He stared at Second and looked back over the paper, as he began to read aloud. ‘If we can have a parallel existence between your Earth and mine, why not multiple universes?’

With a shaking hand, he took a match from his desk drawer and set fire to the paper, placing it in his bin.

‘Do we know if he discussed the contents of this paper before he wrote it?’

Second shook her head. ‘We’ve pulled all the audio files from any neighbouring wrist braces, and nothing was detected.’

First frowned. ‘What about his own?’

‘He doesn’t always wear it. He’s not impressed by the wearing it for the common good argument. Also, according to the notes, in his monthly assessment he commented, that as it wasn’t mandatory, he’d rather not.’

‘In his defence,’ said Second, ‘he was tracked and spied upon through his wrist brace.’

‘But that was unsanctioned. He would never have known about it if we had been doing it.’

‘I don’t think he sees it the same way. And, of course, he doesn’t quite see the for the good of society the same way we do.

‘This is not news to me, Second.’ She flinched. Repetition of information was an unnecessary waste of time and unworthy of her rank. She waited to see what First was going to recommend. At this point, she felt her next suggestion would be at odds with his. She felt that Julius should be more closely monitored. He was an excellent example of a Beta mind and she wanted to study him.

‘I have determined that Julius Strathclyde is a threat to society of the first order. He is an unresolved paradox.’

Second betrayed no emotion. First’s reasoning was sound, but where Strathclyde was concerned, Second felt that First may be slightly conflicted.

‘In order to protect the citizens of Alpha Earth, I will arrange for Julius to be removed from it.’

Second nodded her assent. She felt sure that they had lost a research opportunity, but First was within his rights. Julius Strathclyde must die.