Judging a book by its cover. It takes a village. 4/?

Of course you shouldn’t judge, but there we are. For years I didn’t read The Colour of Magic because I didn’t like the Josh Kirby covers. I’d glanced at them and thought they were more in the vein of the Conan books. Yes, I know! Anyway, I finally picked one up after being told I would love it by so many people, read the first page and never stopped reading.  That is until The Shepherd’s Crown,  I haven’t read that. Once I read that, there’s nothing left. So no, I’m saving that for sometime else.

Judging a book by its cover

Back to the importance of a book cover. It needs to do two things; it needs to stand out and to fit in. You need to flag to your potential audience that this is similar to something that they have already read and enjoyed. You only get a few seconds to grab the attention of a browser as they scroll past your cover. Clearly, a cover says nothing about the quality of the writing or storytelling, but it gives a sense of quality. A well designed cover tells the reader that the publisher has spent money on the cover, the natural thought progression from this is that they care about the product. The production values are high which implies that the writing is of a similar standard.

Does it promise what it delivers?

But no matter how lovely your cover is if it doesn’t hit your market, you are going to disappoint or confound the browsers that stopped to look at it.  Maybe they give up at the blurb, which is disappointing, worse is when they buy the book and discover it isn’t for them at all, and leave a poor review.

Your book cover should make a promise and your story should deliver on that promise.

Look at the images above. Which is your favourite? You can see which one I went for below.

As I mentioned in a previous blog, I selected Books Covered, Stuart Bache’s design studio, to make my cover. This was my most expensive purchase based on the concept that first impressions count.  I’ll do a cost blog in about three months.

Now, picking a design was a nightmare and I still don’t know if I got it right.  The designer sent me three designs based on my initial brief. One immediately jumped out as gorgeous, but I needed more feedback than just gut instinct. So it was back to the village, and I offered the three choices to various reader and writing groups.  They largely agreed with me but I remained concerned that the cover did not properly suggest SF or adventure.

I asked the design team to show me three covers that focused on this aspect. Again they sent me three gorgeous covers and I had an immediate favourite.  Again, I took it to the village and they mostly agreed with me.  This time though, my preferred option was also drawing some negative comments. That was a little concerning, so instead I went back to the village and asked if they preferred the first best option or the second best option.

Option one won overwhelmingly amongst those that hadn’t read it. Those that had read it said option two was a better fit, but that they would have still picked up option one and would have enjoyed it.

I went back to the designer and asked for help. What did they think?  Here’s what Stuart said.

Book covers serve two purposes: to catch our eye and to impart information in nanoseconds. Hopefully, both of these will lead the viewer to buy it.

The information we need is usually: genre/some narrative, author, title (in any order).

The next thing to think about is: will people notice/like it enough to buy it?

The thing about readers’ opinions is that it’s ‘after purchase’, it doesn’t tell you whether they would have bought it or not. Also, unless the cover is overwhelmingly wrong – which is usually reserved for book covers that use the completely wrong imagery for the genre (i.e. cozy romance cover, pure erotica story) – there will be little to no impact… especially digitally where you see the cover fleetingly after purchase.

The two you have chosen are great covers, either one will work. I would go with your gut-feeling and lean slightly towards to people who ‘haven’t’ read the novel.

Personally I prefer option two, but I’ve decided to go with the more popular cover. If I’ve got it wrong at least I have a great fall back to re-launch with.  The other thing to bear in mind is how the series progresses and I think option one will support that path better than option two.

Anyway, having finally decided on a cover, we went through a few further tweaks and now its ready to be launched on the world. I think it’s beautiful, I just hope it also works.

Time will tell. Which is appropriate for a bunch of time travelling curators.

Incidentally, this is the final cover. Was it your favourite? 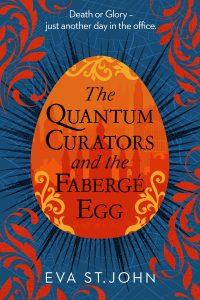 It takes a village to publish a book. Part 1/?

Formatting, pricing and distribution of a new book – the village goes quiet. 2/?

Trying to turn the village into a town. Book marketing. 3/?