After eighteen long months I finally made it back to London. I love staying in the City, I tend to stay in the actual City of London, the Square Mile, heart of the financial centre of London and a very quiet section of the metropolis. It’s normally quiet at the best of times, low on tourists, low on residents but this time it was also low on workforce. So much of the City is still working from home and it was evident in all the closed and boarded up coffee shops and bistros. The knock-ons of this pandemic go on and on.

Anyway, I went to London to celebrate the launch of The Missing Codex and to keep my eyes open to new ideas for book four, you never know when something will jump out at you. I was also there to visit the Nero exhibition.

Was it worth it? 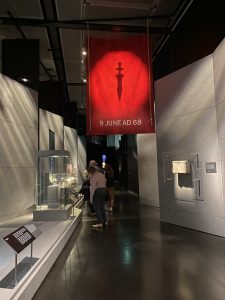 No. Honestly, I thought the exhibition was overpriced and underwhelming. Thank god I didn’t also have to put up with crowds. Sometimes special exhibitions are stunning, sometimes they are just blah. I thought this one was blah. Your standard statues and artefacts and a range of information boards. I don’t know, I just thought that for such a dramatic history we might have had a more dramatic presentation of the evidence.

What was worth it was a trip to the Mithraeum. This is an underground Roman temple, free to visit, located under the Blomberg building.  It was first discovered after the Blitz and has since been preserved and moved twice. it now sits near to its original site and has been vary carefully preserved. There’s not a lot to see, just stone and brick foundations, but through the clever use of smoke and lights and sounds effects you can see the walls and columns and hear the chanting. Very smart. Upstairs there’s a fascinating finds board of all the artefacts found, and these are really cool. I loved the glass vials and the shoes. So human reaching down the millennia.

Museum of London and Postman’s Park 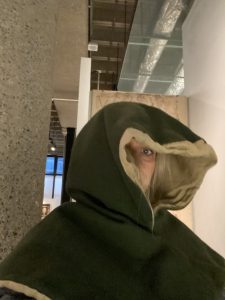 I also visited these for the first time. The museum is excellent and I played silly buggers dressing up in stuff as my husband wandered past telling me that’s how people got the plague. And as we had just passed the plague section I had a small shudder. This museum is much more interested in the lives of Londoners through the centuries and is a good way of understanding history. Especially interesting for a writer 😀

Just outside the museum in a small park in a corner, is a wall of tributes to heroic self sacrifice. It’s incredibly poignant and a reminder of how anyone is capable of being a hero. Also, that being a hero rarely ends well.

Bang up to date 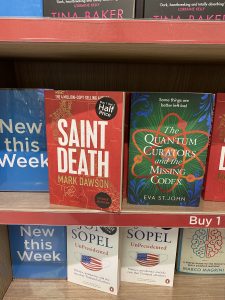 As well as playing around in the past I visited some of London’s newest buildings and wine bars. (Research – honest) The view from the Sky Garden, the “walkie-talkie” building is amazing and is another attraction that is free to visit.  Well worth it, and it is so stunning to look down on the city and just wonder at how bloody impressive it is.

So, did I get any inspiration for book four? Yes. But I’m not going to say what. As Song says, Spoilers!

In The Quantum Curators and the Fabergé Egg, the hunt is on for a Russian doll, could it be hiding a priceless treasure? The section from below is from the book, I hope you enjoy it. To read more about the dolls follow the links at the end… 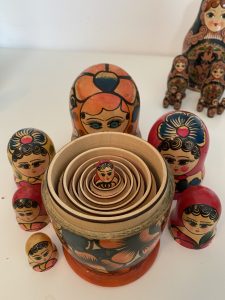 ‘I need to pick your brains about matryoshka dolls.’

‘Cakes and dolls. What a lovely way to start the day. Excellent. What do you need to know?’

Julius explained that he was trying to track down the lost casing of an outer doll. He hadn’t seen the inner dolls, and had just had them described to him. All he hoped for was an idea to the size of the outer casing and maybe the subject matter.

They were seated in two comfortable armchairs and had a coffee table between them. Now Marsha wandered around her rooms, returning with doll sets until the table was covered in them.

‘Okay. Matryoshka or Russian dolls are a nested set of wooden canisters. Each canister opens at the middle, revealing a smaller unit within. These reduce in size until you get to the smallest solid doll in the centre. You can have any number, but the preference is for around five or seven. The cluster of dolls is also thematic. Family members, politicians, et cetera. The inner doll is the smallest or least important, the outer doll is the most important. Another cake?’

Julius leant forward gratefully, and having put the cake on his plate, picked up one of the doll sets. Opening up the first doll, he looked inside.

‘That set you’re holding has a political theme. It’s quite a modern set and made for the tourist market. Russians are more careful about political statements. Unless the statement is, “We support our current leader”. In Russia, you know, we are famous for our freedom of speech. But those freedoms only last as long as the speech itself. I have a joke that will help you understand.’

Marsha cleared her throat. ‘A frightened man came to the KGB. “My talking parrot has disappeared”, she said in a gruff voice and then changed her pitch to reply as the KGB officer.

‘“That’s not the kind of case we handle. Go to the criminal police”. “Excuse me, of course I know that I must go to them. I am here just to tell you officially that I disagree with the parrot”.’

Marsha laughed and slapped her leg. ‘See! We are not idiots. Russian politics is for tourists.’

Julius laughed along with her as he stacked the dolls back together. His attention now taken with something more folk like.

Marsha pointed to the old, faded doll he was holding. ‘Now that one is the oldest in my collection and sounds like your doll. You see she is not as garish as these two?’ said Marsha, pointing to two very pretty and slightly gaudy dolls. ‘This one represents the seasons, that one is supposed to represent a traditional doll, but look at the two of them side by side.’

Julius looked at the modern doll, painted in a bright and traditional style. The face of the doll was blank and characterless. The older doll, however, was completely different. The paint was probably never quite so lurid, but more importantly, the face on the doll was realistic. This was a portrait. Julius felt certain that if he met the person in the flesh, he would recognise her. He opened the whole doll set and could see a family resemblance running through the dolls, from the outer matriarch to the little girl.

‘Would an old one always be a woman on the outer casing?’

Marsha thought about it. ‘I have seen male ones, but they were called matryoshka for a reason. If your outer casing is male and old, it would be quite collectable. However, you will be able to tell if it matches your set because the artistry between the dolls will be by the same hand. The inner dolls you have described sound as though they were not Soviet mass-produced items.’

The pair chatted on until a clock chimed and Marsha apologised, saying that she needed to go and teach. I have to work so that they will pay me. It’s not like in the good old days when workers pretended to work, and bosses pretended to pay them. But this is progress!’

Kissing her on the cheeks, he set off.

Some of my own Russian Dolls. See, they are perfect for hiding things in.

To read more click here for The Quantum Curators and the Fabergé Egg.

The Other Russian Dolls

The Art of the Russian Matryoshka

or the following websites;