Fabergé – The Jewel of the Russian Downfall

The Imperial Easter Eggs of Carl Fabergé by Toby Faber*

“Between 1885 and 1916, Carl Fabergé made fifty jewelled eggs .  These were Easter presents from Russia’s last two emperors to their wives.  What happened to them is a fascinating story which combines unique decorative art, contemporary culture, history and the murder of the Romanovs with the excitement of a crime novel.”

(These are my notes from a recent Art Society talk.  Really loved this one but then who doesn’t love jewels and revolution?)

The timeline of the Fabergé eggs follows a sad and bloody path. The brighter and more wonderfully the eggs shone the greater the contrast to the world that was falling around the Romanov’s ears.

Alexander III had married the Princess Maria Feodorovna of Denmark, a beautiful woman who loved court life and social occasions. Despite being a foreigner, she was adored by the Russian people; she in turn embraced Russia learning the language and the customs of her new homeland. Following her father-in-law’s assassination, her husband moved his family to Gatchina Palace, twenty miles away from St Petersburg. It was more secure, almost an armed fortress but certainly less entertaining. Possibly, in an attempt to cheer his wife up, he commissioned the first Faberge egg in 1885.

“In my opinion, the article is a complete success and can even be said to be praise-worthy for its fine and intricate workmanship. In accordance with your wishes, the ring was replaced by an expensive ruby pendant egg, the stone of impeccable quality. If Minny (Editor’s note: Tsarina Maria Feodorovna) should wish to wear the little egg separately . . . the case contains a thin chain for this purpose.”

The letter goes on to describe in detail how the egg and its various surprises should be correctly opened. Alexander III replied the same day from Gatchina Palace:

“I am grateful to you, dear Vladimir, for the trouble you have taken in placing the order and for the execution of the order itself, which could not have been more successful: The workmanship is really very fine and exquisite. Your instructions for the delicate handling of the object are so explicit that I was able to carry them out easily and with complete success. I do hope the egg will have the desired effect on its future owner (Maria Feodorovna).”

Clearly, the Tzar was offering a gift to his wife that he hoped to impress or please her, or simply to say sorry.

The exquisite egg was clearly well received. Every Easter afterwards Alexander presented an egg to Maria. The House of Faberge would create a fabulous egg with some hidden treasure inside. Various artists would work on the piece, Faberge himself was simply the overseer of the creation, rather that the sole creator. Such efforts meant it could often take more than a year to create.

The House of Faberge. The Finest Jewels and Metals

The Faberge Easter Eggs were made of the finest materials; gold, platinum, rare minerals, diamonds, rubies, pearls and intricate enamelling and tooling. They contained hidden surprises, hidden knobs on the egg could be turned and a picture would pop up, or the egg would open to reveal a clockwork train set. These treats were all crafted in precious metals and gems. And all in miniature! Most of the eggs are only a few inches tall, the size of a goose egg.

A curator from the Royal Collection examines a mosaic egg, made by Russian jeweller and goldsmith Peter Carl Faberge which was originally commissioned by Tsar Nicholas II in 1914 and acquired by Queen Mary in 1933, part of the new Faberge exhibition at Buckingham Palace, London, opening on Saturday 23 July. (Photo by Dominic Lipinski/PA Images via Getty Images)

An image of the missing gem and crown inside the rosebud

Maria loved them and Faberge cleared enjoyed making eggs for her. Tragically, Alexander II became ill and died in 1894 at the age of 49 having only ruled for 13 years. Now his eldest son came to the throne, the ill-fated Nicholas II. Nicholas was 26 when he became Tzar and it’s fair to say he was hopeless. He wasn’t ready, his father dying at 49 was unexpected and he was an indulged and unseasoned young man. Uncertain of how to rule he tried to follow his father’s course and listened to the advice of his uncles. None of which were paying a close eye on the growing proletariat and the country’s desire for a constitutional monarchy as opposed to a totalitarian one.

Happily, one of the ways that Nicholas decided to follow in his father’s footsteps was in commissioning an egg from Faberge for his mother and one for his wife, Alexandra Feodorovna. So now there were two imperial eggs each year. The eggs for Maria continued to be playful and beautiful, but those for the new Tzarina were a little more formal. Alexandra was a quiet, reserved woman and harder to know. Faberge had no relationship with her and the eggs seem a little more remote. She probably loved them, who wouldn’t, but maybe when she saw her second egg she winced. It was the Coronation Egg, a breathtakingly beautiful egg, with incredible enamelling. Within was the Imperial carriage that had brought her to the coronation. 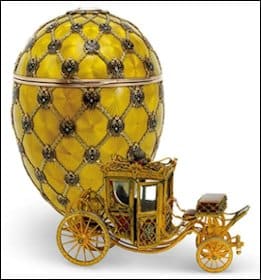 The problem was that it was celebrating an event that turned out to be truly horrific. Shortly after the coronation, crowds had gathered, as was traditional, to greet their new Tzar. The crowd was larger than anticipated and the Imperial guard were unable to marshal them properly. There was a stampeded and between 1000 (official sources) and 4000 (unofficial sources) people were killed. If that wasn’t bad enough, on hearing of the disaster, the newly crowned Tzar and Tzarina, instead of heading to the tragedy, went to a ball. This was widely reported and Nicholas never shook the impression of being uncaring. It wasn’t a great omen for the rest of his reign.

Lillies of the Valley Egg

As an adoring mother, Alexander loved the 1898 Lilies of the Valley egg. Hidden inside was a set of miniature portraits; her husband and her two daughters. However, that was a sore point. Daughters were not the blessings that a son would be, in fact they were a problem as Nicholas had no heir. Paul I had hated his mother Catherine the Great so much that he had changed the Russian law so that no women could ever rule again. So there were no more eggs featuring the children until a son was born.

No eggs were presented during 1904/05 as Russia was at war with Japan, a war that Russia had been confident of winning and comprehensively messed up. Nicholas felt it was inappropriate to give eggs during a time of upheaval. However, by the first world war the eggs were presented throughout, maybe Nicholas had stopped caring about how it looked?

In 1917 two eggs were in production but were never presented; following the Russian revolution and assassination of the Tzar, Tzarina and all their children, and then there were no more Imperial eggs.

To this day, several of these eggs are missing and it is unknown if those in production were ever completed. Given that when these eggs come to the market they sell for many millions, they have become the greatest Easter Egg hunt in the world. Most recently one was bought in a flea market, for around £13k, this was its scrap metal value.  It was reportedly sold a short while later for over £20 million, when it was discovered what it actually was.

So, keep your eyes peeled. You never know…

The Chronology of the Imperial Eggs

Toby has written two works of narrative history, Stradivarius and Fabergé’s Eggs, published by Macmillan and Random House, and given lectures associated with these two subjects at venues in Britain and the USA. His career began with Natural Sciences at Cambridge and has worked in investment banking, management consulting and five years as managing director of the publishing company founded by his grandfather, Faber and Faber.

If you are interested in knowing more about the eggs and reading Neith’s briefing document, sign up for my newsletter. Who knows, you might even find one of the missing pieces.