I am thriller to reveal the cover for the third book in the Quantum Curators series. Once again, I am bowled over by how good this cover is from Stuart Bache at Books Covered. I thought you might like a sneak peak into the symbols in the atom as well as the blurb.

A cover and a blurb work hand in hand to deliver a promise of the story inside. Fingers crossed, you’ll like what is on offer.

The gods don’t exist but who’s going to tell them?

Something is rotten in the heart of Alexandria and Julius Strathclyde is in trouble. He appears to have summoned the gods, which is driving his partner, Neith Salah, insane. Not to mention all the other ultra-rational citizens of Alpha earth.

The gods set a challenge that can’t be refused. The race is on to find the lost blueprints for the Quantum Stepper. Whoever possesses them will be able to unlock the stepper’s true potential.

The game is afoot and the outcome is terrifying. All of time and space will be under the control of the victors; to protect, or to plunder. Can Julius and Neith get to the plans before their rivals?

If they lose, Julius’ earth is doomed, but if they win, Neith’s earth will continue to disintegrate.

Can they find a third way? Or will the gods win out?

For lovers of fast-paced, witty novels. The Quantum Curators go from strength to strength

Eagle eyed readers have already spotted that this is the famous Brunelleschi Dome, which can only mean one thing. We’re off to our Florence. There are a lot of rules regulating the curators getting anywhere near Leonardo da Vinci. How many do you think the curators break.

Well, this is at the heart of the book but honestly, there’s a very good reason it’s been hidden for centuries. Neith, Julius, step away!

He is one of my favourite gods just because he’s such fun. Anansi is a well known trickster god of Caribbean and African origin. He’s a mythological character and god of stories. He’s witty, cunning and funny. Sometimes he’s cruel. And occasionally, he’s terrifying.

Spoiler alert. I’m not going to tell you about the swallows. You’re just going to have to read the book yourself!

Book one, two and three. The series goes from strength to strength… 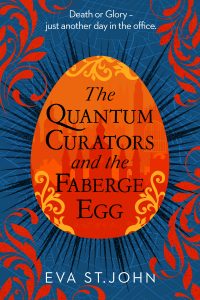